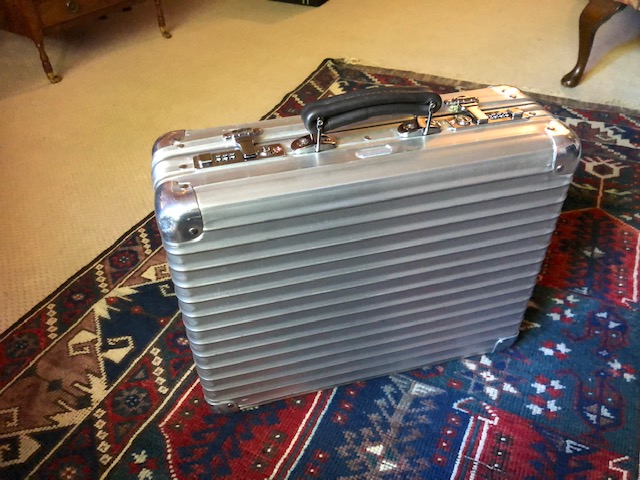 I had it only for a few weeks when it was stolen out of my car outside our house. I was so upset that I immediately went to the RIMOWA store in Bond Street and bought a replacement. The store is very smart and had only just opened.  So I got the replacement on a special offer.

When I got home about a week later the original case was on my front porch with a note from a neighbour who had found it thrown into his front garden and identified me from the contents.  Apart from some money not much was gone, I now had two identical cases, but RIMOWA were reluctant to take back a used case. So I decided to sell the second on eBay – very successfully as it turned out.  The briefcase has travelled with me to and from work every day since..

As a result of the miserable Brexit saga, my wife has decided to reclaim citizenship in her place of birth. This involves a great many documents, including her most basic certificates concerning her family and education. These all had to be carefully copied and certified. So I took them to work and copied them most carefully, placing the results and the originals in a red plastic folder.

The next day I went to the dentist. I parked my car in Hans Place. While at the dentist I suddenly thought about the documents and so, when I got back to the car, I opened my case and, no documents. I phoned my PA to check if I had put them in my briefcase.

I parked my car in Smith Street off the Kings Road and went to have my afternoon tea and cake. I was gone for an hour, occupied by doing some shopping and buying a book. I drove home and parked the car outside my house. A little later I remembered that my briefcase was still in the car. I went out to collect it, but when I opened an unlocked boot, the case was gone.

It had been stolen during my parking in Smith Street. I was very upset and hated to lose a treasured possession. The contents were not very important now.  Then I remembered my wife’s documents with a jolt in the pit of my stomach.  But I also remembered that my PA had phoned to tell me they were safe in my office at work. I was overwhelmed with relief. But I still mourned the loss of my brief case.

So the next morning I went , by bus, to Bond Street to the RIMOWA store. I nice young man greeted me and informed me that the briefcase was no longer in the range. I was very disappointed but he called after me that he had heard that there were a couple still on sale at Selfridges.  I went there at once, walking in the sunshine through the expensive shopping streets.

At Selfridges I went down to the luggage department and asked about RIMOWA.  I was told that they were stopping the line but had a few items left.  He pointed to a nearby stand and there was one lonely briefcase.  I was delighted and bought it at once from the startled assistant .  It turned out that I  had bought the last of the line, and shall really look after it.