You are here: Home / Politics / Wanted! A Government Which Cares.

Following the June fiasco of a general election, we now find ourselves with effectively no government. A minority government, at the best of times, is difficult. I was part of such a government in the mid-1970s, but at least we knew what were the priorities and managed over the next few years to carry out sensible and beneficial actions.

But now we have a government without any ideas, and without any policies except to leave the European Union. And they are doing this while ignoring all the real problems that surround us.

On the home front, we have serious problems with our health service and its funding; an educational crisis; our care for the both the elderly and the disabled is underfunded; our police and prison services are starved of enough money to actually do the job; and our Transport system is decrepit, and one of the worst and most expensive in the world.

Almost everything that makes a country worth living in is run down or in ruins. At the same time the rich get richer and a luxury building boom rages in London.

Almost everything that makes a country worth living in is run down or in ruins. At the same time the rich get richer and a luxury building boom rages in London.

On top of that we have to face a rising tide of humanity sweeping in from Africa and Asia trying to enter Europe and make a living here. At the same time, we have disaffected Muslim youth across the world determined to inflict random acts of terrorism on us.

We have a serious problem of extravagantly overpaid managerial, political and cultural individuals. This produces envy and discontent among the majority of people who have seen no increase in their standard of living for 20 years.

One would have thought that anybody entering politics at this time would be concerned with this not inconsiderable list of unhappy situations, all of which need a combination of careful, and caring management.

The sad truth is that our adversarial politics is now revealed to be a massive disadvantage. Throughout Europe governments are all coalitions. Policy is developed and enacted by negotiation and agreement. The plain fact is that there are not two sides to every question. Every question is multi-faceted. There are always complicated issues and nuances and these need to be carefully analysed, and considered in all decisions. Above all, running a country is a matter of good management, not politics.

As a nation, we managed for decades with no constitutional guarantee of our citizenship, and a trust in our politicians to work and act for the good of the whole community. This was made possible by two factors: we had a powerful and well informed civil services who always tended to steer the government to the middle ground and the welfare of all; we also had an understanding by politicians that they needed the input and support of all forms of expert opinion and experience.

Now we have a weak Parliament, underpaid and ill-informed, reduced to acting like trouble shooters from the Citizen’s Advice Bureau. Even worse, we have a third-rate Cabinet unable to carry out a policy which everyone of any standing recognises, is unsustainable, unmanageable, and materially damaging to us all. Rather than governing in the interests of the whole nation, they insist that, somehow, a silly and hopelessly manipulated referendum has to determine Britain’s future.

Theresa May has the largest Cabinet in history, packed with second rate, prejudiced, and self-serving men more interested in their careers than our welfare.

It is a mark of Britain’s recent history that we tend not to choose the most competent leaders, with maybe one great exception. But this time we have found ourselves with a real loser in every sense. Mrs May has no idea what she is doing, no personality, no understanding and no interest in leading the whole country. If she had the wit, she might take a leaf from Mrs Merkel’s book and realise that one cannot govern for only half of the population. The referendum was a cry for change, but its terms meant that the result needed interpreting. To just push ahead, ignoring all the advice from everyone of any standing, simply ensures that she will go down in history as our stupidest Prime Minister ever. Truly, she is steering us all to disaster, and the word Titanic comes to mind.

She is trying to deal with her lack of leadership or sustainable polices by having the largest Cabinet in history, packed with second rate, prejudiced, and self-serving men more interested in their careers than our welfare. Not even the most benign committee could function as a decision-making body with 30 members. In the war, Churchill’s cabinet was five, but there was no argument about expertise over opinion. There is no substitute for clear policy demonstrably in the interests of us all and rejecting all kinds of extremes. 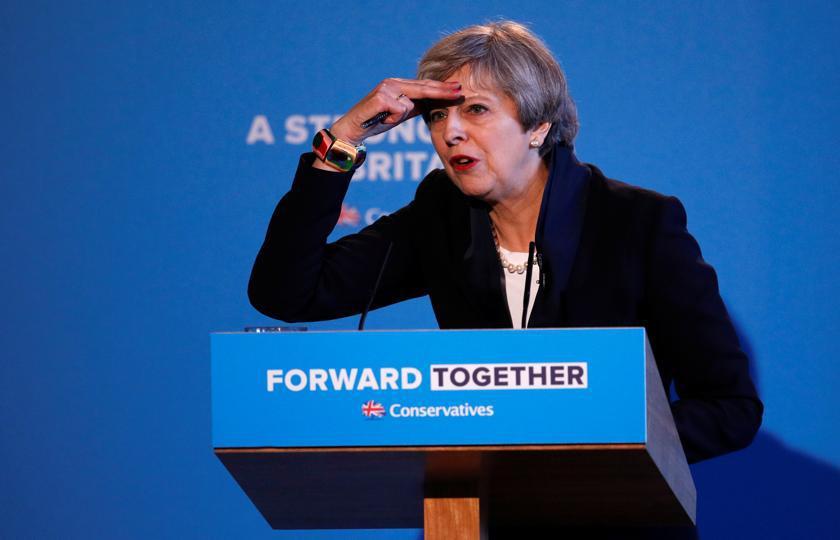 Right now, as 2018 dawns, Britain sinks to the bottom of the table of countries with happy and satisfied electorates. We have become a joke internationally, and our standing in the world is lower than even the dark days of the Suez crisis in 1954. As one travels abroad, our friends and well-wishers shake their heads and sympathise, and ask why Britain is finally destroying its last standing in the World. The term ‘offshore banana republic’ is suggested.

We need a government that cares, that will repair our health service; care for our elderly and disabled; reduce the costs of our utilities; and strengthen our judiciary. We need a government which abandons this stupid vanity project, and restores our reputation. In short, we need a government that really cares about us, and starts to spend serious money on making Britain happy again. In truth, we need Parliament to wake up, force this incompetent gang out, and demand a sensible, one-nation government instead.