You are here: Home / Politics / An Open Letter to Ed Miliband 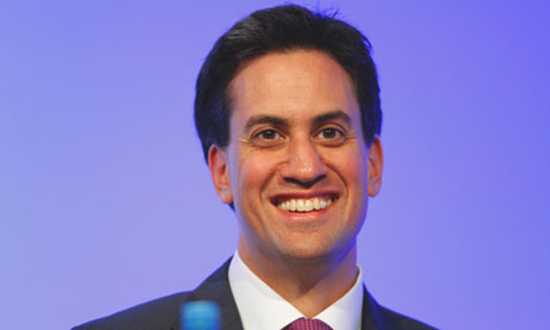 To The Right Honourable Ed Miliband,

Leader of Her Majesties Opposition.

You are certainly a very nice man and quite evidently an intelligent leader of your party.  However, you are allowing your opponents to set your agenda.  This puts you on to the defensive all the time.  You must control your own agenda and to do so it needs to be new, easily understood, and positive.

It is clear that the Cameron Tory PR machine has disciplined the whole party to focus on two things. First they want to continue to blame your previous government for all our present problems. Secondly, the Tories, encouraged by the more heavyweight media, led by the BBC, want to force you to make detailed proposals, especially concerning matters of taxation and public spending.

You know, and the public now know, that it is quite irrelevant to try to blame Gordon Brown especially when the accusations are untrue.  Notice that audiences have begun to groan every time this ploy is used.  This government have had three years to put things right and have obviously failed.  You must go for them on this at every opportunity.

Do not be bullied by demands to say how you will pay for your policies.  All your colleagues must assert that our rich country can afford it and deciding how is just arithmetic.  You must make it plain to everyone that it is for the government to specify how matters shall be dealt with now and not question the opposition who do not have either information or current expertise to make detailed proposals about public expenditure.

You must go on the attack, and do so in terms of outcomes and policy and not matters of detail.  It is very clear that there is a huge target for you to aim at.  It is intolerable that we should persist with nearly 3,000,000 unemployed in what is one of the richest countries in the world.  It is the government’s responsibility to put people back to work. Not some vague ‘private sector’.

A number of recently published books by eminent academics have emphasised the long-term debilitating effect of mass unemployment.  It has always been a hallmark of the Labour Party to emphasise the importance of full employment.  You should now make this a policy and throw back at the Tories that miserable jibe that Labour wasn’t working.

The way you put the country back to work is to build houses.  It is very clear that the deficit in annual house starts is not only ignoring the problem of expensive and scarce housing, but making it steadily worse .  This cannot be dealt with by the private sector.  There must be a programme of mass public building works financed centrally by the government directly, with no intermediaries taking their fees and profits.

You might also state that selling off council houses was a very bad mistake since it deprived so many of decent housing, and spawned the very expensive housing benefit scheme – now over thirty billion pounds of welfare expenditure.  New council houses would surely help with that problem.

When you are asked how you are going to afford to put the country back to work your answer should be that the intricacies of finance are a consequence of the political determination and should not in any way drive those objectives.  You need to make it clear that the whole debt issue is a myth because public debt is owed to the public and therefore entirely neutral as to the gross domestic product.  However, attempting to repay the debt takes resources out of the economy and actually depresses gross domestic product.  Attempting to pay off debt in a stagnant economy just makes matters worse.

The idea that reducing the size of the public sector is beneficial is based on a complete misunderstanding of the way the economy works.  Reducing public sector employment puts people out of work and that reduces overall demand, which makes it impossible for the private sector to increase output and increase investment.  This should be obvious to anyone in a situation where interest rates cannot go any lower but there is a substantial shortfall in new productive investment.  It is not difficult to explain this to the general public.

By the way you must keep matters simple.  Avoid complicated jargon.  Just talk about wealth, not GDP, and focus on buying and selling rather than demand and supply.

You have to start to say openly that a comparison of public finance with domestic budgets is completely spurious.  When a family decides to reduce its debt it cuts spending and that reduces its share of demand.  But the family is only one small unit in the economy and others will do the opposite.  If the whole economy tries to repay debt this reduces overall demand which in turn reverberates through the whole system and actually reduces national income.

You will inevitably be challenged about the problem of carrying forward debt to our descendants.  This is, to put it mildly, quite mendacious.  There has been national debt since the time of George III, and the only current problem is whether there will be unsustainable increases in charges.

The fact is that the ‘bond market’, so feared by politicians, does not seem to care much about the size of the debt.  And in any case, the interest on the national debt goes to all the holders of that debt, many of which are pensions and other long term savings funds.  The interest charges are paid back within the economy to those who hold those bonds.  A very small proportion of the national debt is held overseas and in any case Britain has a net positive balance in such debt.

You should not be deflected from a fiercely aggressive, and single-minded attack on this government.  It is, in my lifetime, quite the weakest and most incompetent government that this country has experienced. The targets are wide open.  Making people miserable because of a financial mismanagement is not a way for any government to endear itself to its electorate. Worse still, it is actually oppressing its own people.

The idea that by cutting public expenditure and throwing people out of work the private sector will magically produce the jobs which people need is completely spurious. I can assert from personal experience that throughout the last five years private sector businesses have been doing everything possible to reduce costs, raise productivity, and therefore cut the labour force.  This is the private sector response to this severe recession.

You will be accused of printing money and causing inflation if you expand the money supply.  There are two answers to that.  First, inflation is very unlikely when overall demand is severely depressed.  Secondly, the record shows that the highest rates of growth since the second world war have all been under conditions of moderate inflation.  And, of course, inflation does wonders to the value of debt.

Finally, I would beg you to be much tougher on the new breed of fat cats.  You should at every possible moment refer to the high salaries not only being paid to themselves by the leaders of industry, but also to those in our town halls who have rewarded themselves beyond any reasonable amount. I would go further and say that all those members of the business and public sector community who have overpaid themselves should be seriously and severely dealt with.

Those organisations which are within the government’s own remit, such as central civil service, local authorities, and those businesses, notably banks, which are within the public sector, should all have an immediate and indefinite pay freeze imposed upon them. In the longer term, ways should be sought to claw back the level of pay in the upper echelons of business and public life.  If necessary, penal levels of supertax should be introduced at the very top level.  This would be a most popular move and electorally very beneficial.  The general public are sick and tired of the parade of multi-million pound appointees who are only marginally more competent than those earning a fraction.

You will not be surprised when I suggest that one obvious way to put clear water between yourself and Cameron is to state that an incoming Labour government will stop all the cuts in public services, and restore as many as can be shown to have been harmful or depressed the countries wealth.  This will give an immediate boost to the economy and, with zero inflation and low interest, will be almost without cost.

There will be howls of rage and calls that you want to tax everybody to pay for this.  Simply answer that taxing businesses properly is not a moral matter, just sensible policy.  Promise that business tax will be in future on the basis that “if you do business in the Unites Kingdom, you pay taxes in the United Kingdom”.  Make it a matter of law, not morals.  That should scare the wits out of Mr Murdoch who will not be your friend.

My message to you, Mr Miliband, is to be much, much nastier in your dealings with the government, and much more positive and hopeful in speaking to the electorate.  You must emphasise outcomes, and not detail.  You must give everybody hope that this miserable set of austerity policies will come to an end with the election of a Labour government.  There is no need for us to kowtow to the international bond and securities markets because evidence shows that they remain almost completely un-troubled by the ups and downs of our local economy.  After all, money is only there to enable exchange, savings, and for investment to take place; of itself it has no importance, and it needs to be made quite clear that the true wealth of this nation is in its people, its huge accumulated investment in physical structure, and intellectual talent.

Don’t let yourself be cornered by either journalists or other politicians, and every time they try to remind you that the former government is to blame, just groan, look to the sky, and fire back that the present situation is this government’s responsibility, and nobody else’s. The policies have failed because they could never work.  Tell them that repeating the same thing over and over and expecting a different outcome is the definition of insanity.